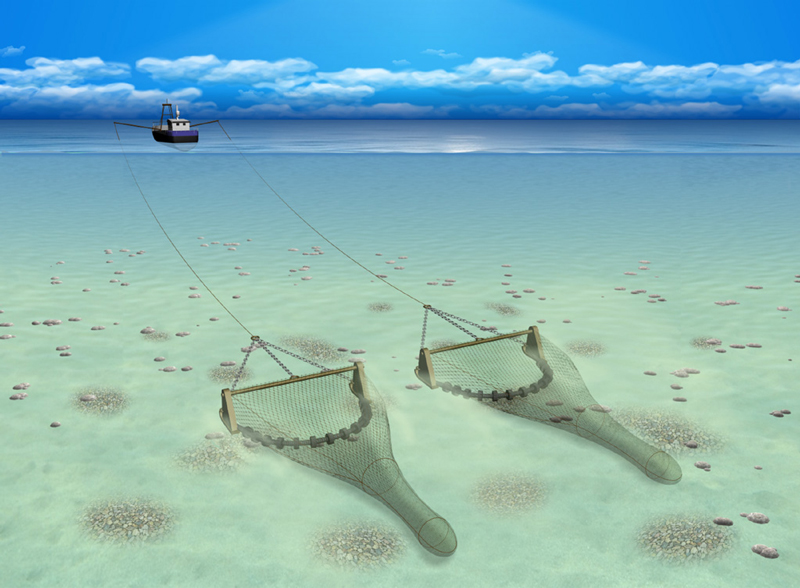 Beam Trawling (image © Seafish)
Beam trawls are heavy duty nets attached to a steel beam that holds the nets open. The belly of the net is made of chains which are dragged along the seabed disturbing the sand and sediment in order to scoop up the target species. In the southwest beam trawling results in a mixed capture, as it is difficult to accurately target one species without others being caught. Efforts are being made by the industry to improve selectivity of beam trawls. The Cefas Fisheries Science Partnership ‘Project 50%’ showed that discards can be reduced effectively by better trawl design. Many changes have already been adopted by the fleet, and the Seafish industry authority are currently trialling a new design of foot rope (called roller balls) that reduce damage to the seabed at the same time as reducing vessel fuel consumption.
The landings from Cornish beam trawlers make up a high percentage of the total catch to Cornwall. Beam trawlers land in the region of 90% of the megrim and 70% of the monkfish that is landed in Cornwall. This equates to a first sale value in excess of £7 million, and is 50% of Newlyn’s wet fish landings. Skippers report that they repeatedly tow over the same areas and find that their catches have remained stable over long time periods.
The gear used in beam trawling does impact seabed habitats. The trawls can reduce biodiversity and productivity of the habitat, particularly when used for the first time in a new area. However, the gear can only be used on relatively soft seabeds, and years of fishing effort has meant the majority of suitable areas have already been fished. These soft sandy or gravelly seabeds are thought to recover relatively quickly from the effect of beam trawls. Tidal currents and wave action will also affect the area, and research published in 2013 showed that in some parts of Cornwall this natural impact is likely to exceed any damage caused by fishing effort.
There are no problems with bycatch of cetaceans and seals with beam trawling, but the method does pose a threat to rare species of sharks and rays, such as angel sharks and common skate, as well has having an impact on benthic (seabed) habitats that support healthy fisheries.
Want to find out more? The following scientific papers give more detail on the impact of beam trawling:
Sewell, J. & Hiscock, K., 2005. Effects of fishing within UK European Marine Sites: guidance for nature conservation agencies. Report to the Countryside Council for Wales, English Nature and Scottish Natural Heritage from the Marine Biological Association. Plymouth: Marine Biological Association. CCW Contract FC 73-03-214A. 195 pp. www.marlin.ac.uk/PDF/FishGuidance05_Final_Report_screen
Diesing, M., Stephens, D., and Aldridge, J. 2013. A proposed method for assessing the extent of the seabed significantly affected by demersal fishing in the Greater North Sea. – ICES Journal of Marine Science, DOI:10.1093/icesjms/fst066.